Built originally on Genesee Street, this tri-gabled “L” structure was the home of the Wickham family for approximately 40 years. The last Wickham was Margaret, who operated a millinery business from the house. The neighborhood saw many changes over the years, including the circa 1925 construction of the Madison Theatre, a mere foot away from Margaret’s business. As a result, that side of the house never saw another coat of paint. Years of decline followed. The house became rental property and was finally abandoned in 1975.

In 1980, with the threat of demolition looming, the house was given a new lease on life when it was moved to its Corn Hill location on Adams Street. When the current owners took possession, the house was a shell with many broken windows. The only functioning item in the house was the Victorian doorbell, which still graces the solid oak front door. There was no plumbing—the copper pipes had been removed. There was no heating system—the steam radiators had also been removed, although their footprints can still be seen in the oak floors. All the wood in the house, with the exception of the downstairs floor and the front door, had been covered with so many layers of paint that many of the designs were completely obscured.

The plumbing, heating and electricity were brought up to modern standards. After removing multiple layers of paint, it was revealed that the window casings were chestnut, and the floors were oak or pine. In one of the upstairs rooms, many long pins were discovered—a legacy of Margaret Wickham’s millinery shop. Also note the elaborately turned spindles, posts and railings on the front porch—a reminder of the craftsmanship that could be found even on the smaller houses of the day. 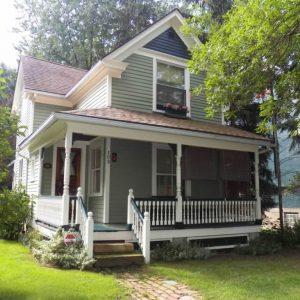 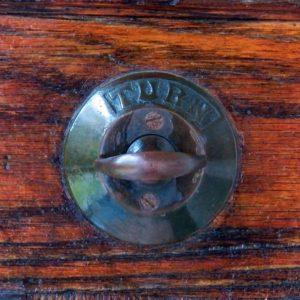 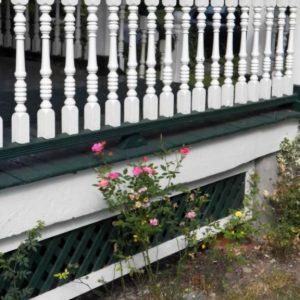 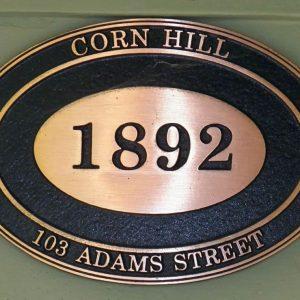 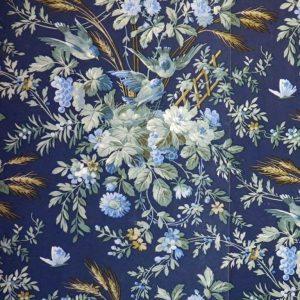 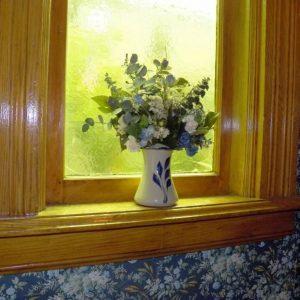