If you had walked down Greenwood Street one hundred years ago or more, you would have seen the same houses that are there today. While many of the mansions that once lined Third Ward streets have disappeared from their Ruffled Shirt days, this short street with modest homes has remained intact well into the Corn Hill era.

This 1500-foot mid-19th century house has known so many owners over the years that it is impossible to track them all. Therefore, it is difficult to write about its past and much easier to write about its immediate future, which is bright.

New homeowner Kelly Radley already has a reputation in Corn Hill as the young woman who bought “the little red house on Greenwood Street.” Although Kelly is not responsible for the exterior color, the interior of the house has undergone quite a change since she took over last year. The assistant principal of a school in Batavia, it comes as a bit of a surprise that, despite her long commute for work, she has found the time to do much of the work herself. “I grew up with a hammer in my hand,” she says, as though that explains it. In all honesty, she acknowledges that her father contributed a fair share to the effort.

In addition to painting every room, she has also made extensive changes to the kitchen and two bathrooms. ”I laid the tile floors myself.” With such major projects demanding her attention, wall decoration has been modest so far. Rest assured, with her energy and determination, it will get done. Just as soon as she can put the hammer down. 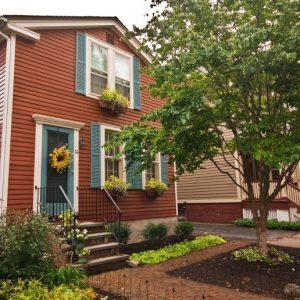