The land records indicate a smaller house on this lot in the 1830s, with an addition by Thomas Thorn in the late 1840s. Patrick Brennan, a tailor, lived here from 1867 until he died in 1890. His descendants stayed until 1939. Like many houses in Corn Hill, the property deteriorated over time and was one of the Corn Hill homes rehabilitated by New Rochester.

Many creative people have lived in the home. Some were art teachers, others professional musicians.   Rob Pearson, an international renown silversmith, lived in the house from 1955 to 1970.  Mr. Pearson was one of the owners of the art collective Shop One” on Troup Street. Today, you will see the creative work of the current owners throughout the home.

In 2013, after the owners raised their daughter in a historic 3,500-square-foot Gothic Victorian 1850 home in LeRoy, NY., they returned to their native Rochester as empty nesters and rented a Center City loft apartment.  In the fall of 2017, while on a dog walk, the owner saw a 1340 sq foot “little bungalow.”  Within four days, they were Corn Hil residents. While the home was move-in ready, they put their touches on the kitchen, creating open shelving and finished wide pine floors.  Note the dining room table and bench, which the owner crafted as a housewarming gift for his wife.  The home is the smallest house on tour, but the little cottage has a warm and welcoming feel. 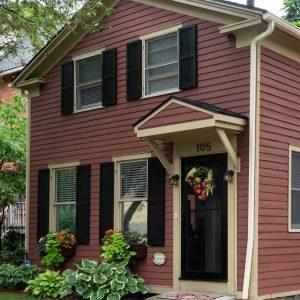