Built in 1870, this two unit row house was originally owned and occupied by Fred W. Dewey, a lumber dealer, then by Charles G. Arnold, a bookkeeper and, later, by Mary Rohde.  Like several of the houses on today’s tour, this two-unit row house was once a boarding house and was scheduled for demolition in the mid to late-1970s.  Part of the urban renew plan to level every dwelling possible to create low-income housing, the home was one of the reasons that the historical and preservation community came together to say, we will save every house possible.

In 1978 Norm and Eleanor Burgess bought the entire structure. They retained this side and sold the other half to Bob and Marion Sherwood. Both families took great pains to restore their homes to their former splendor. The current owner purchased the house in 1990.  Many colorful stories have been passed along as the structure has gone through several transitions.

While these Second Empire attached houses share a mansard roof of bracketed slate and arched windows, each structure has unique characteristics. On the east side of the touring house, find an oriel window of a semi-square plan projecting from the face of a wall and supported by a corbel or bracket.  This house has a wrought iron fence with pineapple finials. The raised basement, at one time, likely housed the kitchens but today contains an upscale efficiency apartment. 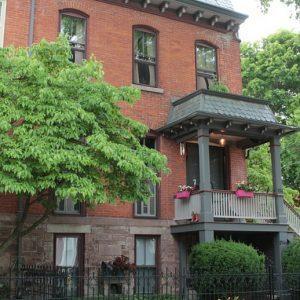 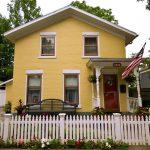 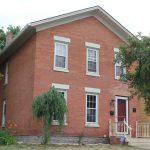 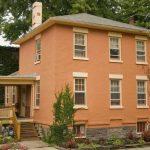 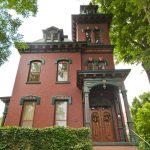