This charming brick home is a prime example of homes originally built on the once private avenue of Greenwood Street for craftspeople, shopkeepers, and widows of modest means.

In 1858, widowed milliner Mrs. Ann Eliza Darragh purchased the lot upon which the house sits. Its construction exemplifies common details of homes built in that time period, including simple stone lintels and sills flanking the windows and doors.

The house remained in the Darragh family for many years. A daughter married a grocer and it is speculated that a horse-drawn grocery cart may have necessitated the construction of the carriage house.

Mrs. Helen Murray Fish moved into the home in 1940, at which time it became like a second home for many neighborhood children. Some neighborhood boys constructed walls to create a secret garden.

Later, this home became the first of several homes in the city that the Landmark Society purchased in their efforts to revitalize historic homes.

The current owner makes a concerted effort to maintain and respect the integrity of this fine historic home. Listed on the National Register of Historic Places, this home is a treat to behold. 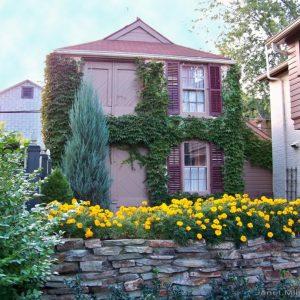