This foundation of this simple Italianate house indicates that it was originally a small house facing Greenwood Street but was later expanded for William Farley Peck and completed in 1873.  William Peck worked at the post office and later became a lawyer, journalist and historian.  It was in this house that he penned the first of his histories of Rochester.  Later he and his brother Edward moved to a larger home at the north end of Greenwood Street, now 121 Troup St – also on the 2013 holiday tour.

Like many of them homes in the area, from the turn of the century to the early 1960s the house was split into smaller quarters, first a rooming house and then a fraternity house for the Mechanics Institute (later RIT).  At one time there was a beauty parlor in the rear of the dwelling and, finally, it became a seven bed rooming house.  RIT moved to its Henrietta campus at the same time as a major population “flight” to the suburbs, causing this home and many others like it to be left to slumlords and deterioration.  There were several fires at this home and the house was marked for demolition.  Even the Landmark Society had labeled the home “OK for demolition,” since they did not believe anyone would come forward to save the historic home of Historian Peck.

Chuck Gearhart, a young photography graduate from RIT and his college roommate Peter Frosiq had become interested in urban pioneering and had purchased a home on S. Washington Street. When an auction was held in 1970 for the home at 48 Atkinson, despite its red “condemned” sign, Chuck purchased the home for $1375.  He gutted the house and restored many of the rooms to their original size.  Illness kept him from completing his work, but his friend and the home’s current owner, Bonny Mayer, picked up the challenge and continued the restoration.

Upon visiting this home, you will see a combination of turn of the century design in the parlor and dining room as well as modern space in the kitchen and library.  The second floor contains a bedroom with cupola, expanded bath and photo gallery and a work place or office, where the current owner and community historian continues the Peck tradition.

As you leave the home, spend a few moments in the meditation garden which, in the winter, is a haven for birds. 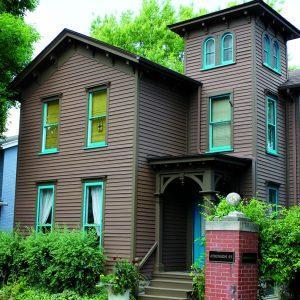 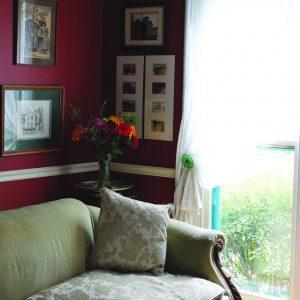 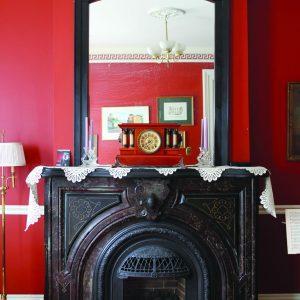 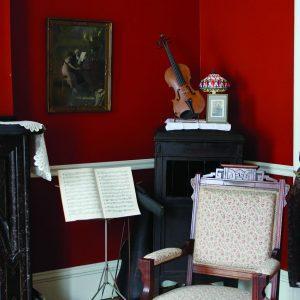 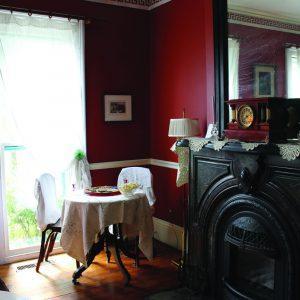