How do you enlarge a space without changing its dimensions? That was the challenge facing Mike Sorensen when he moved into this unit nearly 10 years ago. Fortunately, as an architect, he came equipped with many ideas.

Clearly the homes and townhouses on the east side of Corn Hill are very unlike the 19th Century houses for which the neighborhood is known. Less than forty years old, what they lack in history they make up for with modern conveniences and easier maintenance.  Even so, homeowners often want to make changes that suit their tastes and needs.

Mike was pleased that this was an “end unit” giving him windows on the side of the house that brought in more light than center units. But he still found it dark and cramped. The kitchen is an example of how he opened and brightened the space. By enlarging a narrow doorway, the room now flows more naturally into the dining area. New glass door cabinets and the replacement of the east window with a larger boxed-out window further opened the space, offered greater views of the river, and brought in more day-light. The walls and banister of the 3-story stair were deconstructed and accomplished the same goals of open space and more natural light into the house.

Most people, trying to make a space feel larger, might paint everything white. But Mike uses colors ranging from subtle to bold, defining each space and giving each room a distinctive personality while still providing a cohesive home. Using artwork and carefully chosen furnishings, 1300 square feet have become a very comfortable home for a man and two dachshunds. 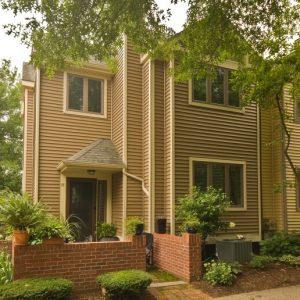 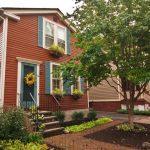