This brick and stone home, with quoins, stone blocks at the corners, is one of just four Rochester structures built in the style of a late 19th century high Victorian Gothic Revival. Note the pointed and arched windows and peaked roofs. The original owner, the builder of this single-family home, was Abelard Reynolds, Rochester’s first postmaster and builder of Reynold’s Arcade in 1828, Western New York’s most modern commercial building.  The home became a two-family dwelling, later a 10- or 11-unit rooming house, and then sat empty for ten years. To save the home, scheduled for demolition, the home was given a designation of Landmark in 1972.

In 1984, Karl and Dr. Valentina Fascher saw value in the deteriorating home and purchased it from the City of Rochester with a mortgage of $8,700. The 11 room 5000 square foot home was converted into three sections, with the owner’s house’s largest grand unit. There have been three owners in modern time, with each doing some renovations.

The current owners moved into the home in November 2019. Both are world travelers, one born and raised in Rochester. They plan this to be their forever home and are currently preparing to add to the family.

Note the tall ceilings and the effect the curved window space has on the inside of the home. The Victorian molding, stained glass windows, and curved spindle staircase make this a spectacular tour stop. 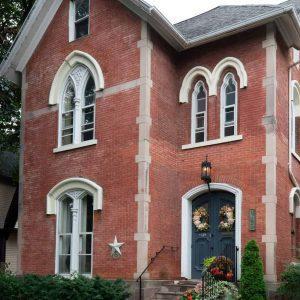 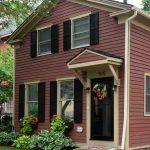